Your favorite battle royale has implemented some major changes. Here's everything you need to know about Fortnite Season 3 Chapter 2.

If it's been a while since you logged into Fortnite, you're in for quite the surprise. The map you once knew by heart has undergone a drastic transformation with the introduction of Fortnite Season 3 Chapter 2. Not only are there new challenges, weapons, and customization options, but there's one major alteration: the entirety of the map has flooded!

Following Fortnite's The Device event, the entirety of the map you once knew is now mostly underwater, bringing a whole slew of threats and ways to play to the game. Too many changes for you at once? Don't panic – we've put together a handy guide to the biggest changes so that you can jump in without missing a beat. It's a brave new world out there.

The map has been flooded 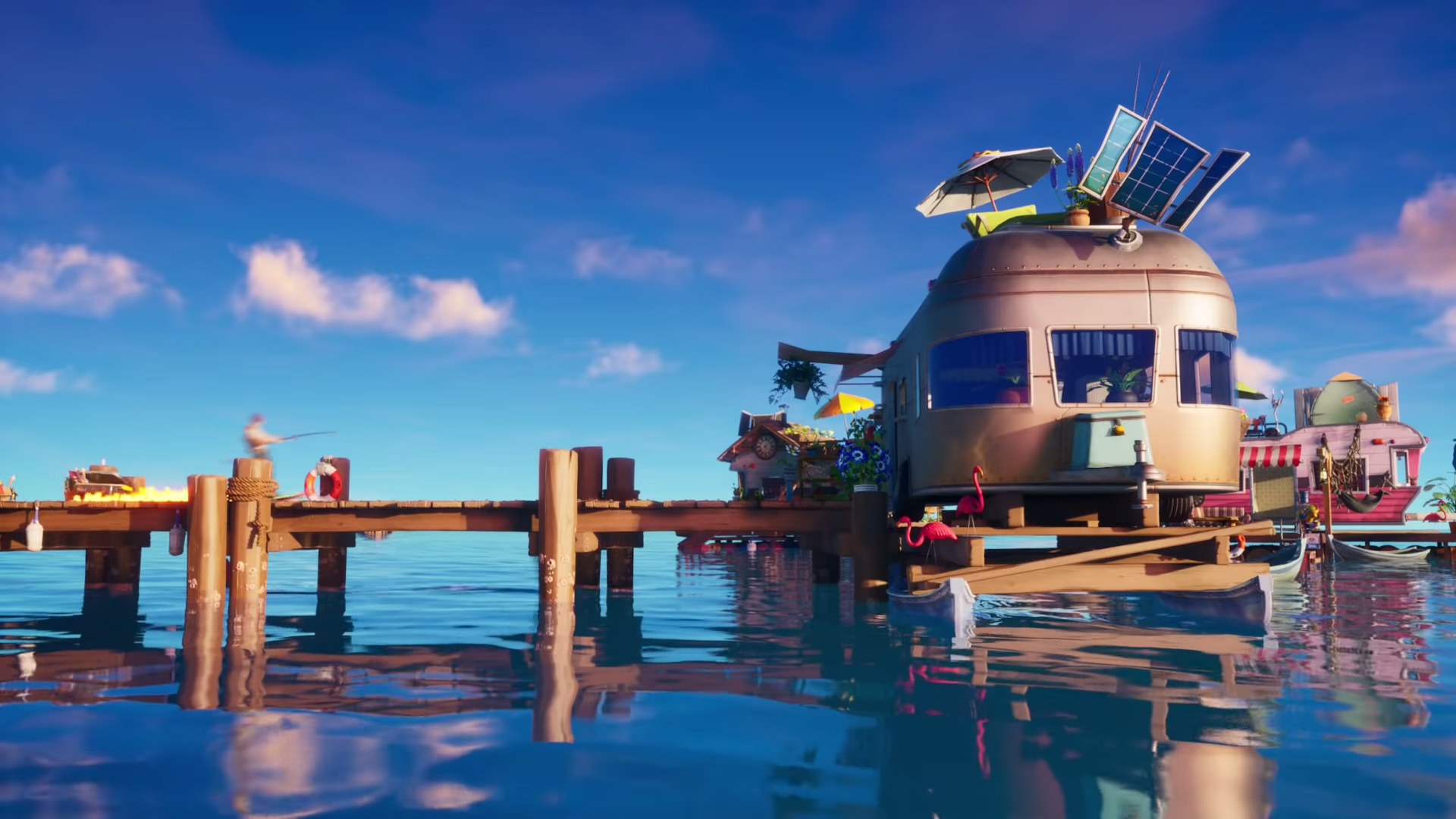 Fortnite used to be mostly bereft of water, but as it abundantly clear when you log in now, the entirety of the map is now mostly underwater, except for the lower right quadrant of the map. There are several new areas to explore, such as the Fortilla, so this whole flooding business was actually a boon in some ways. There's even a new vault to look into there, if you're ready to do a bit of exploring.

But the map as you knew it has been changed, possibly altered in many ways for the foreseeable future, depending on how the next season turns out. Areas like the Weeping Woods and Slurpy Swamp are mostly underwater. In addition, locations like Pleasant Park as well as Frenzy Farm have been given makeovers to keep them afloat – literally – they're now staying on top of the water with inflatable devices. 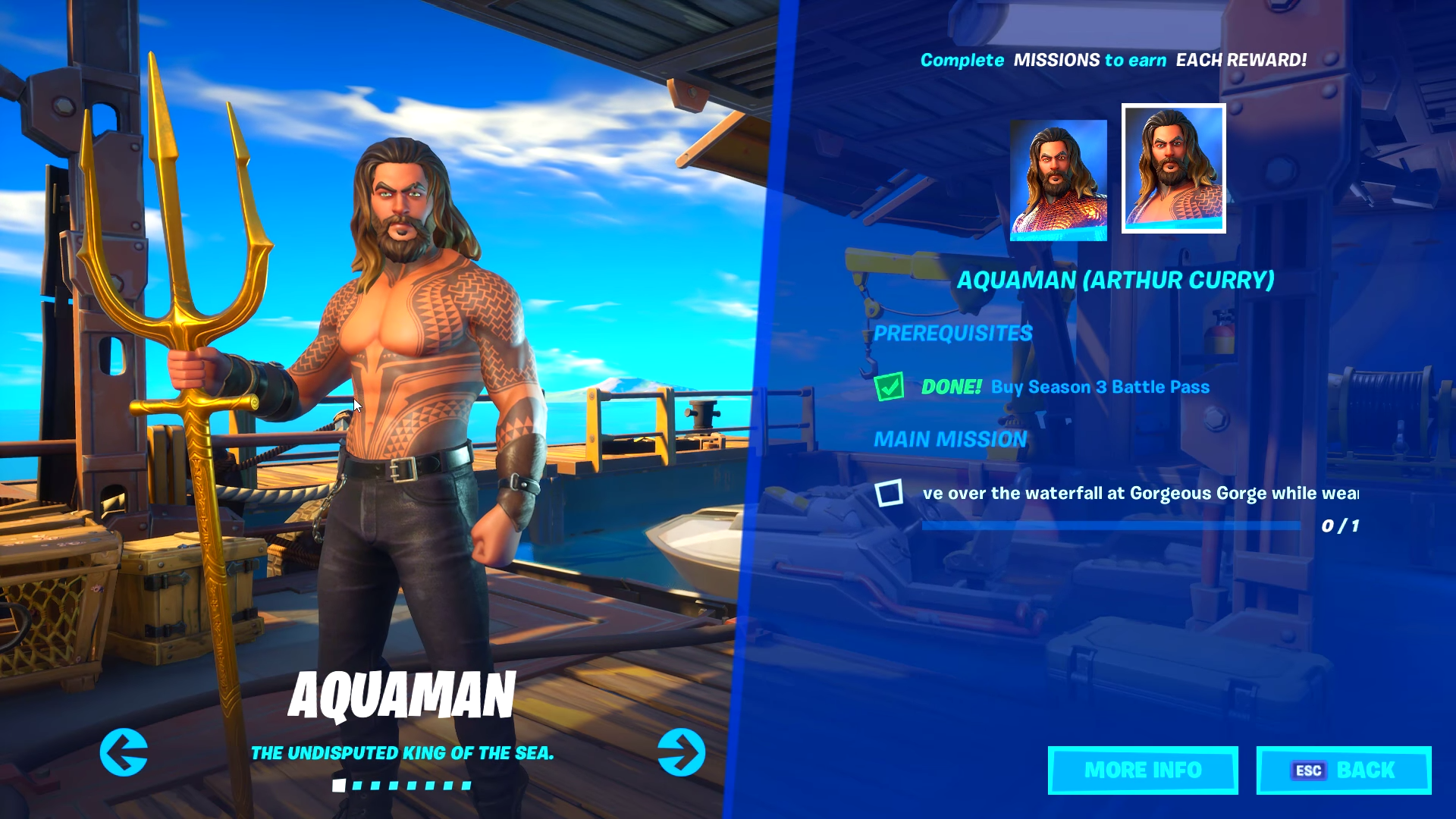 There are always plenty of new challenges and rewards with the introduction of each new Battle Pass, and Season 3 is no different. With the addition of Deadpool in Season 2, there's another DC hero players can team up with: Aquaman. As you complete missions, you'll earn rewards such as the Aquaman skin for your character, both in his iconic costume as well as in civilian clothing as Arthur Curry. There are plenty of other goodies to unlock as well as you progress through the Season 3 Battle Pass.

In addition to Aquaman, you can also level up and complete challenges to unlock new weapon wraps, back bling, emotes, and customizable gliders with the new Build-a-brella system. Fly into the map in style with a colorful new umbrella that's uniquely you as you unlock new colors and customization options through finishing Battle Pass missions.

Sharks are now roaming the waters 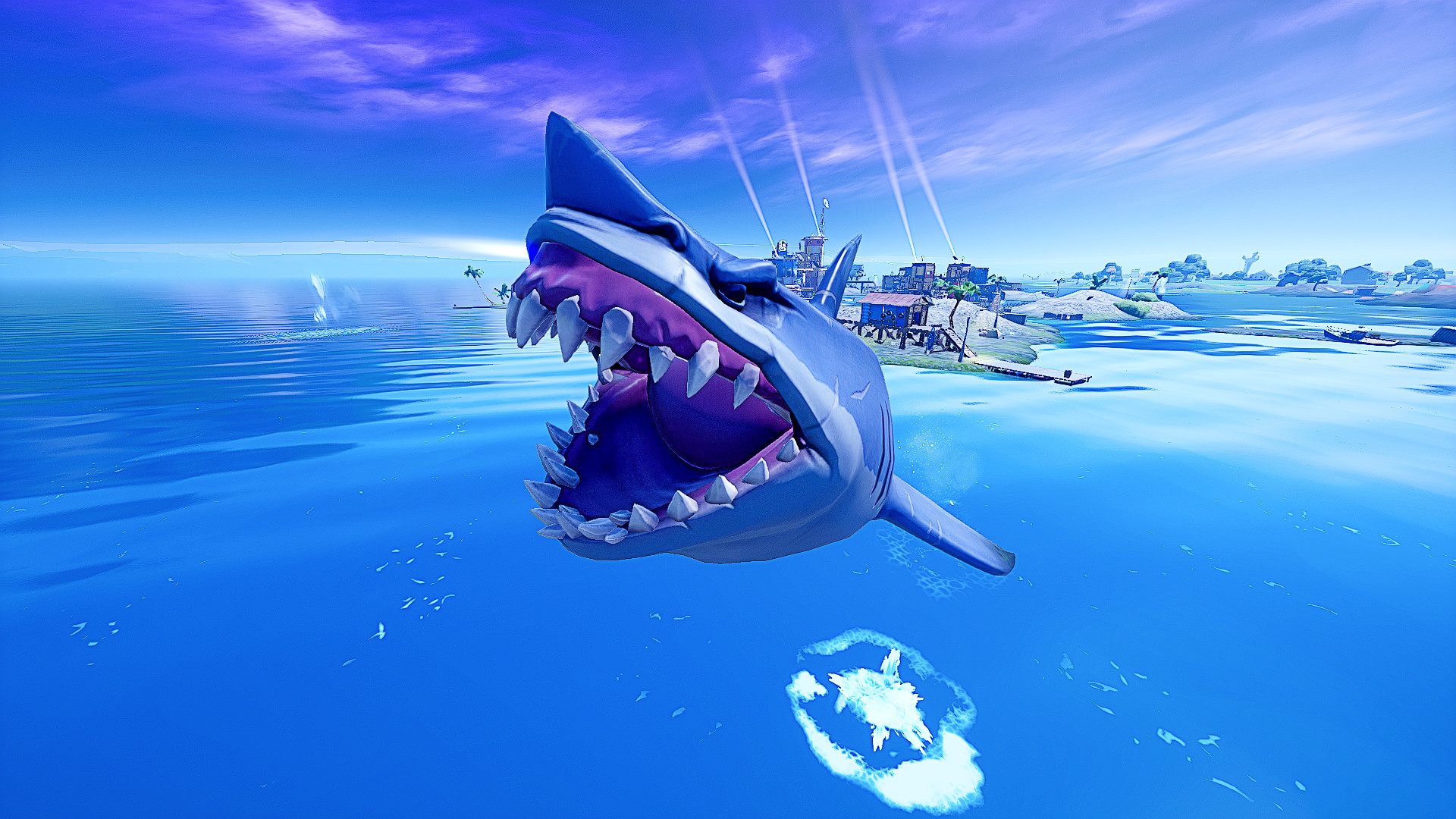 With all the water suddenly having poured into Fortnite, you've got to wonder whether it also brought aquatic life. The answer to that is yes, but you might not like what's there. Watch out, because sharks are now roaming the waters. If for some reason you need to wade through an area to get to land, keep an eye out for these predators. They can be killed, but you'll be in for a decent fight if one decides to turn on you. The good news? They'll drop some sweet loot if you end up taking one out.

If you're quick enough, you can hitch a ride on the back of a shark by hooking it with a fishing rod, which makes for quite the hilarious visual. But beware of deadly whirlpools as you tag along with Jaws to your next destination. If you're swallowed up by one, you'll be sent hurtling through the air back above the map and will have to fly back down to safety by way of your glider once more. 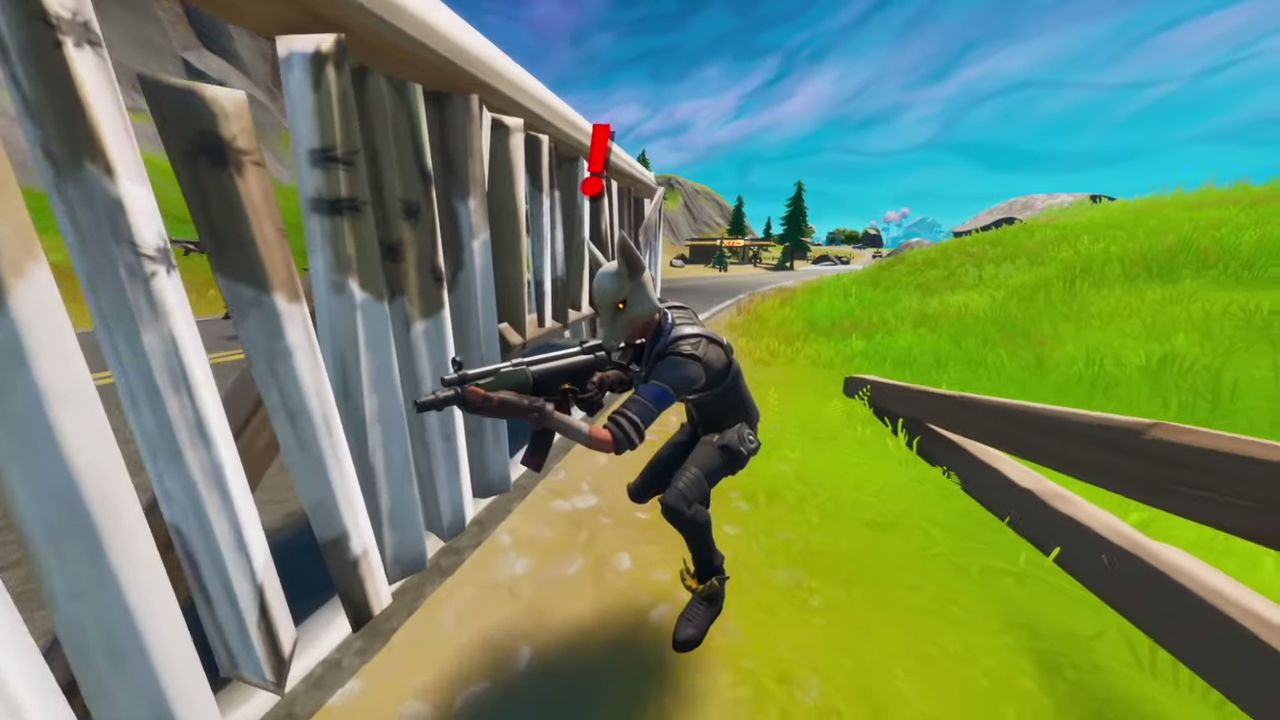 As you're running around the island, you might see a few unfamiliar faces: Marauders. These dangerous antagonistic NPCs appear with strange helmets seemingly at random and teleport all the way around the map. They'll attack on sight, and they're no pushover to take out. Some will even group up in an effort to eliminate you, so be extra careful if they happen to show up and choose your battles.

If you're looking for a challenge that you've prepared for, however, there are also several vault locations, complete with bosses to defeat, such as the powerful Jules or the strangely adorable Kit. All encounters will net you some great loot such as weapons and key cards to access even more goodies.

New and unvaulted weapons are available 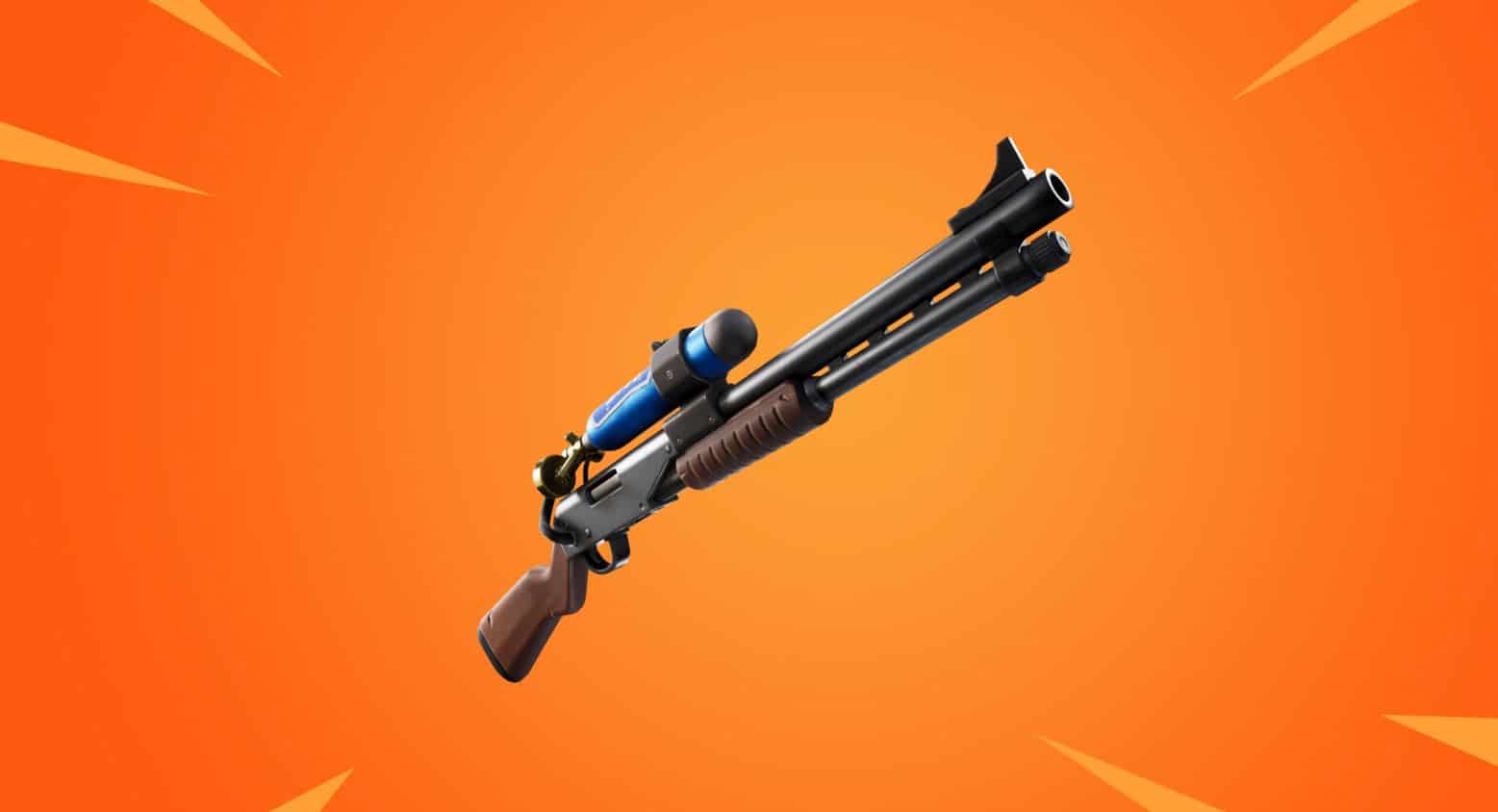 With sharks, Marauders, and new bosses to conquer, of course you're going to need some additional firepower. You'll get it in the from fo the new Charge Shotgun as well as the Flare Gun and Firefly Jar, which you can throw at enemies to damage them. Mythic weapons like Kit's Charge Shotgun and the Ocean's Burst Assault Rifle bring some of that water-themed coolness to the table as well.

Additionally, the P90, hunting rifle, and bolt action sniper rifles have been unvaulted for the time being. It's a great time to go back in-game and experiment with all the weapons on hand, especially since there are even more ways to be taken out during a match than before. You can never been too careful, you know.